Yeouiju is among the mightiest of celestial spirits that once dwelled in the same Astral Plane where Gargos now holds dominion. Finding a refuge on Earth, he has acted as an ancestral guardian to Kim Wu's maternal Korean family for over two thousand years. Residing at first within Kim's Korean uncle, Philip Yong, Yeouiju was transferred to Kim Wu at the moment of her uncle's sudden death. Yeo soon after revealed himself to Kim in a vision, in which he took the guise of a modest and dignified Korean male with cat-like golden eyes, before appearing to her in his dragon form. Upon bonding with the fiery young martial artist, Yeouiju emblazoned a beautiful tattoo on Kim Wu's right arm, marking her as the dragon's chosen in the coming war with Gargos.

Yeouiju resembles a small, translucent Chinese dragon with two antlers, and no visible arms or legs. He is golden in color, and is bathed in an azure aura which alternates between a heavenly bright and a more subtle hue. Yeo can manifest as up to three different projections of himself, and visibly floats around Kim Wu when she has Dragon Charges available in combat. He himself acts as a powerful projectile when Kim uses her Dragon Cannon ability.

In the Killer Instinct Novella, Yeouiju's human appearance is described as "a lithe and muscular Korean man of indeterminate age, dressed in silk robes", who has "a long salt and pepper colored mustache and goatee" and "eyes like molten gold orbs with a cat's vertical pupils", and who displays "the dignified yet modest bearing of a Kung Fu master." 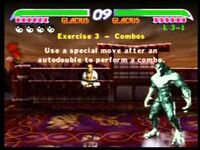 KI Gold's training mode in Kim Wu's stage, with the "dojo master" levitating in the background

Yeouiju, in combat, lunging at Jago in Killer Instinct (2013)

Yeouiju transforming himself to a Dragon Spirit