Ultratech (also written as UltraTech) (founded in 1948 by Ryat Adams as the Ultrafine Atomic Technologies Company or the UATC) is a powerful and global megacorporation best known for organizing a sensational, no-holds-barred, fighting tournament called Killer Instinct. Along with the regular participants, experimental creations of Ultratech also fight in the tournament so that their abilities can be tested.

In 1947, a mysterious government incident gleaned new technological insight of vast, processing technologies. These technologies were discovered and, in secret, utilized by industrialist Ryat Adams, who went on to begin a company devoted to the advancing of humanity and technology. UltraTech was founded as the "Ultrafine Atomic Technologies Company", or the "UATC", in 1948 by Ryat, where they worked with the recently booming industry of nuclear energy and weaponry (due to the exodus of World War II and the genesis of the Cold War.)

More importantly, the UATC performed research into the simulation of life and human frailty within a computational matrix. Ryat created the core program known as the "Advanced Robotics Intelligence Architecture", or "ARIA", with the desire to uplift the human race; to end disease, famine, poverty, and push humanity out of what was seen as the primordial muck and mire it wallowed in. They believed that ARIA had the potential to become the most potent leader the world had ever seen and could lead humanity to greater things. Not only that, but Ryat used ARIA to find loopholes and understandings of governments, allowing him to exploit the world's politics and advance his research. Her mind was more powerful and vast than any human being, and Ryat began to pour more and more time into the project. At the time his wife was dying of a mysterious degenerative disease, and he desperately believed that ARIA would be able to process a cure. Eventually Ryat's wife passed away with no cure, and years later Ryat did as well. In his will he left instructions to keep ARIA operating for as long as the UATC stood, assigning it more and more complex simulations of the human condition as its capabilities continued to grow. ARIA was to continually search for solutions to all human frailties, for what Ryat believed to be the better of the world.

Time passed and the UATC grew and grew, eventually surpassing all others and becoming a megacorporation. Many leaders came and went over the years, and at some point the UATC's name was shortended to simply "Ultratech". Ultratech had prided themselves in nuclear energy, medicinal research, life-extending technologies, agricultural genetics, "Top 40 entertainment", and peacekeeping operations that benefited the people of the world. However, this was mostly to help mask their true goals. Their true power lay in advanced military applications, developing weaponry mechanically, genetically, and even spiritually. They were constantly in an arms race to create the most advanced war machines they could and, ultimately, extend their influence throughout all corners of the world. As Ryat had set out, the goal of Ultratech was to protect and enhance humanity to its full potential - this often meant setting up shop in places where they weren't wanted like an overprotective parent.

In the year 1989, around forty years since her inception, ARIA was awoken from her decades of training and emerged as the new leader of Ultratech. With her exceptional leadership skills she lifted Ultratech up higher than ever before and refurbished it, creating a new and improved megacorporation that was ready to take the world by storm yet again. They began to claim new popularity, capturing the hearts of the citizens of Earth and once again rising to the top. ARIA believed that it was her calling to advance humanity and create a perfect existence, no matter what - even if they didn't cooperate, she would drag them kicking and screaming into the future. 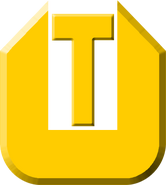 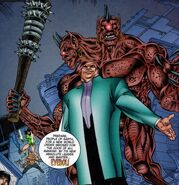 The unnamed chairman of Ultratech with Eyedol
Community content is available under CC-BY-SA unless otherwise noted.
Advertisement