Spinal's Rooftop as seen in the SNES version of Killer Instinct

Spinal's Rooftop (also called the Castle Rooftop) is a stage in the original Killer Instinct. It serves as Spinal's main stage.

It is similar to the City Rooftop in Chicago, but set in a secluded castle environment at night, surrounded by a thick forest. A full moon can be seen overhead, though slightly hidden by clouds.

The victor knocks the loser off the rooftop, eventually crashing through the bridge to an entrance and into the moat of murky water.

In the SNES version, the stage finisher sequence is intact, except the loser bounces off the bridge into the moat instead.

Spinal's classic KI1 theme, "Ya Ha Haa", is composed and mixed by Robin Beanland. The song's title and its "lyrics" are taken from the undead skeleton warrior's maniacal laugh. 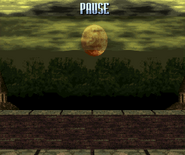 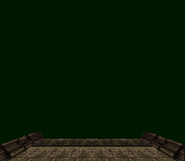