Riptor is a genetically engineered bioweapon created by Ultratech. A crossbreed of human and reptilian DNA, she combines a near human-level intellect and problem solving capabilities with the ferocity of the extinct Raptor genera—together with various cybernetic and biotech enhancements. Riptor was part of the original roster of playable characters featured in Killer Instinct (1994), and became re-introduced to the franchise twenty years later during Season Two of Killer Instinct (2013).

In the original Killer Instinct game, Riptor is a human/velociraptor hybrid, having the basic appearance of a velociraptor, but with much larger arms, humanoid muscle mass in the chest area, and broken shackles hanging from its wrists. The color of its scales changes depending on its renders and in-game appearance, ranging from being primarily orange with black stripes, not unlike that of a tiger, to green scales around its back and tail to orange scales on the underside of its body.

In Killer Instinct (2013), Riptor's muscle mass is distributed in a more reptilian and less humanoid manner, giving it a smaller chest and thinner arms. Its eyes are slightly larger and its head is less pointed, and three flimsy spikes protrude from the back of its head. However, the biggest change by far are the cybernetic components. Metal bionics run down Riptor's back and down to the end of its tail, and its claws have been given blue energy enhancements. In place of its signature shackles are metal plates. The hexagonal patterns along its body slowly fade in and out from light blue to black, and bar codes and the UltraTech logo are tattooed in several places.

Riptor's retro costume mirrors its Killer Instinct (1994) appearance with additional anklets on its legs and has become less bulky than it was in the first game. Its tail is also stretchable, similar to its default appearance.

Riptor’s personality is difficult to determine due to her animalistic reptilian nature. She is a cunning and clever hunter who leads her pack of Stalkers with power and authority, quickly striking down the enemies of Ultratech with fierce genius. She is quite intelligent for an animal, though she still can’t resist some of her primal instincts, and in the end all she really wants is a good meal of fresh meat.

In the original universe, Riptor has a fairly basic moveset, fighting mainly with rabid claw, jaw and tail attacks, along with a venom-spitting attack. In the rebooted universe, however, she has been greatly improved with cybernetic enhancements. She can breathe fire, whether it be a short plume from her throat or an arcing fireball mortar. Her tail can also separate into several linked units to stretch out and attack, similarly to the Snake Sword used by the character Ivy in the Soul Calibur series.

A product of UltraTech's DNA manipulation project. By splicing human and reptilian genes, they have created a fighting creature with animal ferocity and human intelligence.

Another of Ultratech's miraculously realized concepts: a crossbreed of human and reptilian DNA, resulting in a creature that combines formidable intelligence with sheer brute strength. Nurtured from the egg by a dedicated Ultratech professor and her team, the beast nicknamed 'Riptor' by others has barely reached 4 years of age before it first demonstrates its full savage power in a human kill. Riptor is confused and often finds itself torn between human reasoning and predatory instincts, resorting to attack when it fails to understand the situation, as ever more people find out the hard way.

Ultratech's plans at creating a genetically engineered weapon have escalated beyond even their control. By toying with the laws of nature, Ultratech have finally doomed the human race... Dinosaurs once again rule the Earth.

After 20 years since her last appearance, Riptor returned as the fourth character of Season Two. Riptor was brought back to life by Ultratech using cybernetic implants, thus becoming a cybernetic Riptor.

Ultratech doesn’t always look forwards to find the solutions to future military development. Sometimes, they look to the past.

So it was with the Riptor project.

A competing combat contract project with the Fulgore line and the Cinder initiative, brilliant Ultratech genetic engineer Dr. Erin Gupte saw a better path to follow. She thought that Fulgore’s maintenance and lack of ability to adapt to radically different hostile environments would create a nightmare for upkeep and result in a prohibitively expensive machine. At the same time, she saw the Cinder initiative as pure R&D with years before any interesting developments could be realized. She believed that a creature built on a ruthless adaptable predator and augmented and constrained by modern technology would result in the ideal combat platform. It could rely on its own victims for sustainment, and could maneuver and infiltrate in areas that the Fulgore line would never be able to function; Riptor couldn’t be jammed or hacked, stopped by weather, or be disabled by a grain of sand in an intake. Nor would it take a decade of research to decode the alien technologies the Cinder initiative toyed with.

The first batch of Riptor units were vicious, and even with cybernetic augmentation and programming, were completely uncontrollable. No amount of shock, drugs, or control systems would contain them, and they would tear anything it saw apart in moments, making it impossible for them to work as a coordinated team as planned.

Digging into the problem, and amidst the pressures from Ultratech leadership for results, Erin theorized that all her creations had no upbringing, no parenting, only genetic memories to kill that she could not overwrite; they came into the world fully ready to fight, and without any other upbringing to guide them, that’s exactly what they did.

She destroyed the initial batch of Riptor assets and began work on a new batch, augmenting the creatures even further than the originals. Borrowing cast-off technology from the Fulgore project, Erin began using her own mind as a training tool for her new creations, simulating upbringing through her own directed thoughts, guiding the creatures into understanding that there was a place for family, and the idea of a pack…[2][3][4]

You and Your Riptor Unit:

Main article: You and Your Riptor Unit

Information to be added...

During an Ultra Combo, a military base in the background launches multiple missiles at the stage, apparently intended to destroy the evidence of the incident.

Combo Trait - Fire and Tail Linkers: After an auto-double, Riptor can follow up with a three hit flame or tail attack by simply pressing Hard Punch or Hard Kick. 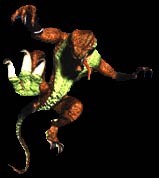 At the character select screen 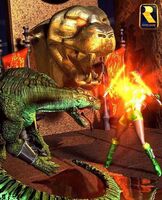 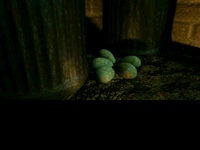 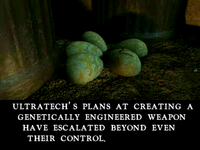 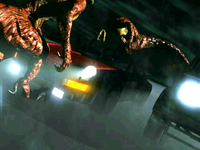 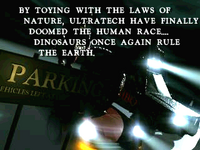 "When she looks at you, you can see she's working things out..."

Avoid making eye contact with her at all costs...

...because it's feeding time!

If the meat's too tough for easy digestion, tenderize it first

It's not like imbuing raptors with a human-level intelligence and state-of-the-art cybernetic augmentation...

The lustrous age of genetic engineering

Riptor's appearance over the years (and platforms) 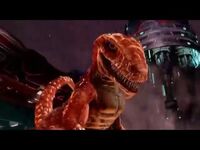 Riptor in her "Hatchery 09" stage 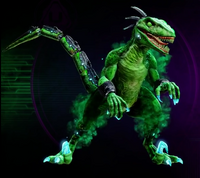 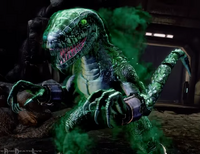 Riptor as part of the "Ultimates Pack 2"

As part of the "Terror Pack" with Fulgore and Mira 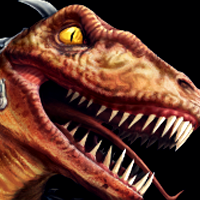 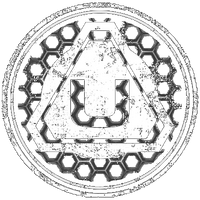 Jago Vs Riptor In the Comics