The Mountain Temple (also known as the Ice Temple) is a stage featured in the original Killer Instinct. It serves as Glacius' main combat stage.

The stage is set on a snowy mountaintop with a partially-collapsed temple featured in the background. 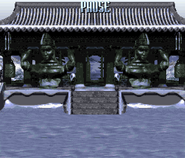