Do It Now! (Arcade version)
Controlling Transmission (SNES version)
The Mountain Shrine (also known as the Ice Pillar or Ice Statue/Sculpture) is a stage from the original Killer Instinct. It is an alternate stage for Glacius.

It visually resembles the Mountain Temple stage by being set atop a snowy mountain, but lacks the partially-collapsed temple itself and instead features the namesake shrine statue. 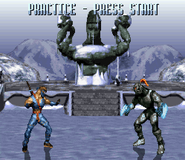