Mira Fallegeros is a character introduced in the third season of Killer Instinct (2013). She's the fraternal twin sister of Maya, and a former member of the Night Guard who sacrificed herself years ago to save Maya during a botched mission slaying vampires, but has since returned as one of the very things they came to destroy. Now a member of a Russian Coven of vampires, Mira has become the favored lieutenant of an ancient vampire master known as the "True Tsar". Although a new character for KI 2013, the concept of a playable vampire dates back to the 1996 arcade game Killer Instinct 2, which would be realized twenty years later through Mira Fallegeros.

Mira has pale-white skin, gold eyes, and tied-back black hair. She wears a red scarf draped over her shoulders while her upper torso, shoulders, and arms are clad with spiked armor, with her most notable features in that regard being claw-like gauntlets on her hands and a large, multi-spiked pauldron on her right shoulder. Underneath her armor appears to be a belted corset of some kind and thigh-high leather boots. A tattered, red cloak is tied around her waist, held in place by a slightly arrow-shaped buckle. In her hair is a ruby scarab beetle-shaped hairpiece, and on each gauntlet is a black metal scarab which latches its claws into her arms before each battle. Her magical blood is shiny and silver, heavily resembling the liquid metal mercury.

Prior to being turned into a bloodthirsty revenant, Mira, together with her sister Maya, was considered the best that the Night Guard had to offer. The fraternal twins were known for being as fearless as they were capable, and would dispatch monstrous creatures on their missions with ease. The human Mira appears to have cared deeply for her sister; something she demonstrated during their fateful mission in the Ural Mountains, when Mira selflessly sacrificed her life to allow her gravely wounded sister to escape the Coven. 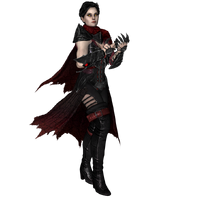 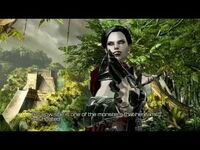 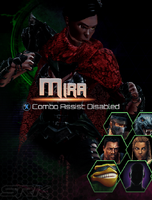 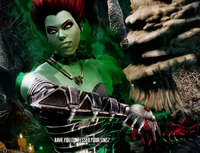 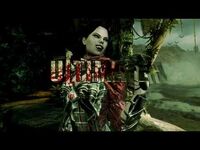 Still from Mira's Ultimate Combo
Add a photo to this gallery

Mira Fallegeros, before The Coven turned her into a vampire
Add a photo to this gallery

While Mira does dislike her sister, she does still seemingly care about Maya when the situation is appropriate. as she put aside her hatred for her sister to defend her from Omen as seen in her story in Shadow Lords Mode.

Retrieved from "https://killerinstinct.fandom.com/wiki/Mira?oldid=31738"
Community content is available under CC-BY-SA unless otherwise noted.