Lock-Out is a new feature present in Killer Instinct 2013. This feature encourages players to read their opponents' tendencies and predict their next moves more efficiently than before. Where the Combo Breaker allows you to escape from potential damage, the Lock-Out is a period of 3 seconds after a mistimed input or incorrect strength of Combo Breaker input (mistiming the input results in an orange cross over their head, guessing the strength wrong results in a red cross) where the aggressor is given the opportunity to dish out damage. In the case of a Counter Breaker the period for a Lock-Out is 4 seconds (or 240 frames). 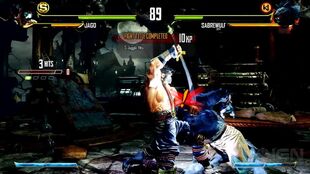 Sabrewulf locked out after the counter breaker

Sadira mistimed the breaker and is punished by Orchid
Community content is available under CC-BY-SA unless otherwise noted.
Advertisement