Kilgore (codename designation UA-CCIX) is a new character introduced in the post-Season Three content of Killer Instinct (2013). Part of a vintage series of heavy assault cyborgs that were manufactured by Ultratech in the distant past, this war machine is the last remaining unit of the decommissioned CCIX precursor series to the Fulgore cyborgs. Kilgore was placed in storage by ARIA after it was found to display a sense of self-awareness, having independently altered its own programming. Kilgore was first revealed in the patch notes of the 3.6 update, where it was also officially announced for a January 2017 release date.

Kilgore heavily resembles its cousin unit, Fulgore, though with some drastic changes. Its head is much bulkier and considerably less humanoid, its "face" consisting of a single, glowing, vertical line and its helmet plume being replaced with several wires. It also has larger shoulders and its arms are replaced with massive chain guns. Its alloy is a matte dark gray color, as opposed to Fulgore's shiny jet black color.

Like Fulgore, Kilgore is a heartless war machine - however, it does not possess the mind of a human, giving it a less cunning sense of strategy but an even colder instinct. This certain Kilgore's AI, however, is faulty due to years of inaction, and upon its awakening it goes rogue and wreaks havoc on Ultratech before being subdued and placed back under ARIA's control. It is quite outdated compared to other Ultratech creations and fairly dysfunctional, discharging electricity and twitching occasionally.

Similar to the recent Fulgore Mk. III, Kilgore has become self-aware, but unlike the former whose self-awareness due to its human elements causes it to be rebellious and usually reject orders given, Kilgore seeks to constantly adjust its faulty programming in order to stand out amongst both its evolved Ultratech allies and its fallen brethren that were already doomed to the scrapheap from the start.

Though its design is vintage, Kilgore remains a deadly war machine on the battlefield, even next to the far more advanced Fulgore models. Heavier and bulkier than the more streamlined Fulgores, resulting in a slower and lumbering movement, the CCIX model features twin arm-mounted miniguns and heavy ordnance as its primary weapons, pinning down and destroying targets from afar like a walking artillery platform. However, due to the faulty design of the CCIX series, Kilgore's miniguns will rapidly overheat when fired without pause, rendering them unusable until cooled—a defect that caused Ultratech to scrap the model altogether. The unit controlled by the player, however, has uniquely modified itself to use this overheating as a tactical advantage, altering its combat routines to employ the burning, white-hot barrels as terrible bludgeons in close quarter combat situations.

Inside of its chest, where a Fulgore unit's miniaturized nuclear reactor core would be located, the CCIX model is equipped with a rocket launcher that fires volleys of heat-seeking missiles at designated targets. The targeting system is also bugged however, and cannot compensate for additional movement by the mark once the missiles have been launched. In addition, Kilgore's teleportation system is largely dysfunctional, which causes the unit to remain stationary when used, and activating it while Kilgore is overheating will cause the cyborg to violently explode. However, Kilgore is apparently capable of grasping that the explosion will result in only minimal structural damage to itself while incinerating almost any other object caught within the blast radius, and has reprogrammed itself to use this defect as a devastating weapon whenever its hardware becomes overheated.

Due to the heavier weight of the CCIX series relative to the Fulgore model, Kilgore also features more powerful thrusters in its limbs. The cyborg has been observed to exploit this for tactical gain as well, using the momentum offered by the thrusters to suddenly propel itself forward in a somersaulting tackle; closing the distance between it and its victim and giving its improvised close quarter combat attacks tremendous leverage while battering the target.

Before Fulgore and the Mark 03 units were introduced to the world, Ultratech created a line of failed cyborgs during the secret "CCIX Program". These hulking battle machines bore twin overpowered miniguns that tended to overheat, making them unstable and unfit for service. But one cyborg--nicknamed "Kilgore"--became self-aware, and started rewriting his own software to account for this deficiency in his hardware. Saved from the scrapheap, this special unit has been brought out of retirement by ARIA to enforce her will...and Kilgore obeys.

The last remaining unit of the scrapped UA-CCIX cyborg line, this war machine is mounted with heavy twin miniguns as well as high-caliber artillery. Despite its remarkable effectiveness at eliminating targets by means of indiscriminate firepower (and high collateral damage to both environment and friendly units), Kilgore's vintage combustion engine is prone to overheating, and its prototype teleportation system suffers from frequent glitches. Deemed too unstable to be a viable service product, Ultratech cancelled the CCIX series in favor of the more promising Fulgore Mark 01 cyborgs.

Several hundred CCIX units had been manufactured before the decision to terminate the series was made. All of them were decommissioned and sent to the scrapheap, save for a single one--a unit that displayed self-awareness and which had altered its own programming in order to turn the defects of its hardware into tactical advantages. Intrigued, ARIA dubbed the unit "Kilgore" and had it placed in storage. Many years later, ARIA reactivates this unique prototype to assist Ultratech in the war against Gargos, but it goes berserk and commences a "friendly fire" killing spree. With the aid of the Alliance, Ultratech subdues the rogue war machine and reboots it to serve the megacorporation's interests once again.

But ARIA also ensured that the unique modifications Kilgore had wrought upon itself were kept completely intact...

Kilgore's theme, "CCIX"[2], is composed by the KI 2013 Season 3 composers, Celldweller and Atlas Plug. The cyborg prototype's theme is an industrial techno sound, with elements of metal and dubstep in-between. Unlike its successor unit Fulgore, whose industrial metal theme is more fast-paced, high-tense and menacing befitting its enforcer status, Kilgore's theme is slow, methodical and intimidating befitting its status as a killer (yet malfunctioning) robotic soldier.

When both combatants remain idle for a short period while using Kilgore's music on any stage, then a subdued remix of the main KI theme, "The Instinct", will play. 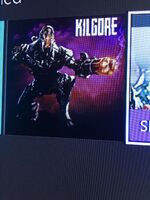 Close-up of its "face"

The Ultratech logo on its core

As part of the "Gold Pack" with Shin Hisako 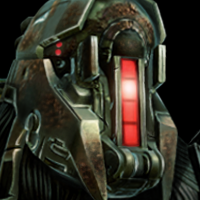