The Forgotten Grotto is Aganos' designated stage in Killer Instinct (2013). It is the fourteenth stage that is introduced to the game and the fifth stage (the sixth, if counting the bonus character Omen and his stage) introduced in Season 2.

The stage takes place in a cavern that opens out to a large body of water (most likely the Mediterranean Sea). Near the fighting area are several, ruined structures and statues of Greek design, including a half-sunken building and a staircase leading out of the cavern. In the distance, there lies the ruins of a large, Greek city built on a small island just off the coast (this island rises up out of the water as the battle begins), and a long, bridge-like structure connects it to the mainland. Over the course of the battle, several other war golems are constructed by a magical, cyan-colored energy, and they stomp around in the ocean.

During an Ultra Combo, large chunks of metal are sent into the sea in the background, which creates a gigantic, metallic golem near the shore and another smaller one in the distance.

During a Stage Ultra Combo, the victor sends the opponent into the line of sight of the metallic golem in the background, who shoots a beam at the opponent, slowly turning them to stone. After the opponent has been completely petrified, the stone turns to dust, dissipating in the wind as the winner taunts in victory.

Aganos' theme "Polemos" is used as the background music for the Forgotten Grotto. It includes a sitar, a string section, and a heavy guitar, making it sound theatrical and grandiose while still retaining a Mediterranean feel. It also includes a choir chanting in Greek with lyrics written by Panos Kolias. It also features additional guitars and programming by Casey Edwards.

When the characters hold still for a certain amount of time, the music will change to a Mediterranean version of the main KI theme song, "The Instinct". 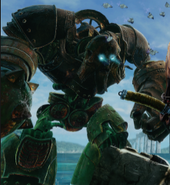