None (destruction and violence incarnate)

Eyedol is a fearsome, bicephalous monstrosity and a primary antagonist of the Killer Instinct series ever since he featured as the franchise's original last boss in Killer Instinct (1994). One of the two demon warlords that were banished from Earth in the ancient past, the other being Gargos, in Killer Instinct (2013) Eyedol's a corrupted champion who was slain by Gargos, his nemesis, and who was thereafter foolishly resurrected by the sorcerer Kan-Ra. Eyedol made his return to Killer Instinct after twenty-two years on July 27th 2016, as the eighth and final playable character to be released in KI 2013's Season Three.

In Eyedol's classic design, he appears as a massive, gray- (or green- or brown-) skinned, two-headed cyclops with glowing red eyes, and goat-like legs with cloven hooves. He wields a massive, spiked mace and is the tallest character in the game.

In Killer Instinct (2013), Eyedol received a substantial overhaul. Unlike before he now appears to have only one head, however it has been split completely in half down the middle; so one eye is on each side of the cleft. His brain is visible within the massive gap, and purple and red lightning darts across the divide, connecting the two pieces of his head. His left eye glows purple and his right eye glows red, and the horn on the right side of his head is broken off at the end. He retains his gray skin, but now has swirling tattoos running along half of his body that glow purple, and also has ropes slung around his torso. He is less muscular and more pot-bellied, like a stereotypical ogre, though still very large in stature. He wears a single pauldron on his right shoulder and a loincloth with human skulls attached to it around his waist. His legs are digitigrade like those of Gargos', but his three-toed feet appear to have large, blunt toenails rather than sharp claws like his foe. He wields a massive club or mace laced with human skulls. When focusing on physical combat his red-eyed side takes control, and when he focuses on magical combat his purple-eyed side takes over.

Eyedol's retro costume largely mirrors his original 1994 appearance, though he is much bulkier than he was in the original game. Each head only shows one horn instead of two and lacks his original chain ear piercings. Though he still has a purple-colored eye for one head and a red-colored eye for the other and keeps his new skull-laced club from his default KI 2013 costume.

Once a champion who was chosen by an angelic race of demi-gods to save the world from Gargos, Eyedol's body and soul were consumed utterly by manifold factors: The magically enhanced abilities granted to him by those benevolent beings, his own pride and arrogance over the supreme victory that he managed to achieve over Gargos, and him seizing a large portion of the Astral Tyrant's dark power. Together, they caused Eyedol's essence to slowly but surely turn a sinful black, and over time, they hideously transformed him into the very thing he once was empowered to destroy—a fiend and an ungodly monster.

Crowning himself the god-king of a vast empire in a time now long forgotten, when countless humans sang his praises and worshiped him as a divinity who walked the Earth, Eyedol's boundless lust for god-like status and power absolute seemed his greatest strength, yet it became his downfall. His corrupted being lost control over all its base impulses and Eyedol went berserk with greed, pride and wrath, almost completely wiping out the ancient heroes of the world who tried to contain his rampage and tyranny; which led to him being banished to the Astral Realm through the bravery of the immortal warrior Tunth-ska. There, Eyedol finally met his demise at the claws of a cunning Gargos, who had been waiting for him in the darkness of the Void.

After being slain by the Shadow Lord and getting his head spliced in two, and after having been reanimated by the arch-sorcerer Kan-Ra, the fallen god-beast Eyedol is now extremely obsessed with one thing: Total annihilation for the sake of its unbridled retribution. To this end, he violently turns against Kan-Ra upon his resurrection and immediately goes on the war path. His one-track (or should we say, "two-track") mind becomes his only guide as he demolishes, brutalizes and magically destroys everything and everyone on his dark path to exact merciless vengeance on Gargos.

Ever since his head was split in half by Gargos, Eyedol's tremendous might has been diminished in two different ways. All of his power -and indeed his very mind itself- has become divided up into two separate entities: his red-eyed "savage head" and his purple-eyed "warlock head". The personality of the "savage" head is excessively violent, rushing over with abandon and impulsively lashing out with sheer ferocity and utter bloodlust. The "warlock" head's personality, however, is ominously calculated as well as deviously patient, and utilizes cataclysmically powerful magicks to ruin Eyedol's enemies with from afar.

When his Instinct Mode is activated, Eyedol's split personalities merge and his true strength will temporarily return to him. He becomes a god-like force to be reckoned with: An unholy beast embodying the ultimate power, brutality and sorcerous might.

Eyedol is Ultratech's trump card. Remember the warlords from the Prologue story? Well, Eyedol is one of them. Ultratech's scientists snatched him out of Limbo to do battle with the finalist in this year's Killer Instinct tournament. Little did they realize what kind of power they were releasing when they set Eyedol free from his magical prison...

Eyedol and his greatest rival, Gargos - known only in the modern world to the Monks of the Tiger as the great Spirit they serve - were the last surviving Warlords of ancient times, battling for ultimate control of the land. The heroes of the age joined together to banish them to Limbo, and for 2000 years there they stayed: but now Ultratech's meddlings have resulted in a device that can scan the void for life, and despite their efforts to shut it down before anything nasty gets out, a weakened Eyedol manages to break through at the last minute, right into the company's scheming hands.

Eyedol's ending is actually a joke ending that parodies Blanka's ending from Street Fighter II. The name was changed from Jimmy to Billy, probably as a reference to British pop singer Billy Idol.

If he wins, a random woman approaches Eyedol after the tournament and sets into motion a rather strange ending with the following dialogue:

Being a secret character, Eyedol can only be selected by players through a built-in cheat code.

Eyedol suffered his ultimate defeat at the hands of his rival Gargos, who split his head completely in half down to the neck. However, Eyedol's remains were somehow located by Kan-Ra, who sought to reanimate the fallen god-beast in order to use it as his trump card against the Shadow Lord and his forces. But even Kan-Ra's necromancy lacked the power needed to fully resurrect and control Eyedol, causing the mighty demon lord to quickly break free from the sorcerer's bonds and once again rampage across the Earth as destruction and violence incarnate.

Eyedol's new theme for KI 2013, titled "A Shattered Eyedol", was composed by the duo Celldweller & Atlas Plug. It is an industrial-techno remix of his classic 1994 boss theme, "The Extreme", and features an 1980s horror vibe that is similar to the soundtracks of John Carpenter's movies, notably to the opening theme of The Thing and some elements from Klayton's Scandroid project.

When both combatants remain idle for a short period while using Eyedol's music on any stage, then a synthesized remix of the KI main theme, "The Instinct", will start playing. 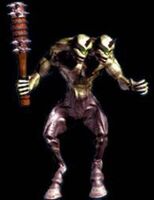 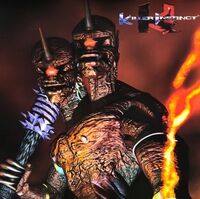 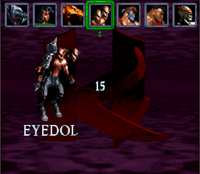 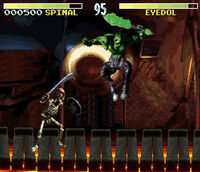 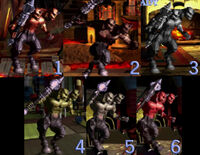 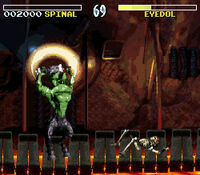 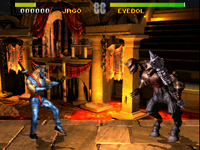 Eyedol's Lair, his primary stage in the 1994 arcade game 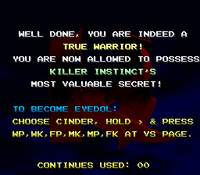 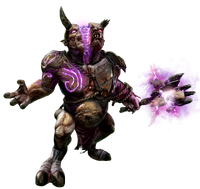 ...are NOT a stable mixture 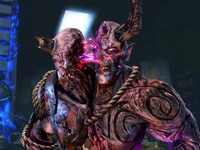 ...are both pissed off beyond the ken of mortals

Trying to reason with Eyedol worked out swell

The wrecking ball in the background is fairly metaphorical

A long-forgotten nightmare returns to our world

The god-beast within the Astral Plane 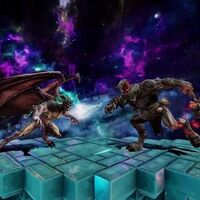 The greater of two evils 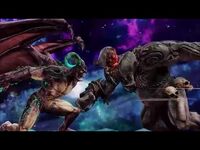 Eyedol's retro color 2, resembling the green coloration he took on in the SNES port of Killer Instinct (1995) 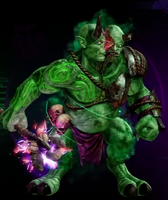 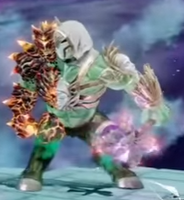 As part of the "Gold Skin" along with ARIA and a Silver Shadow Jago Skin. 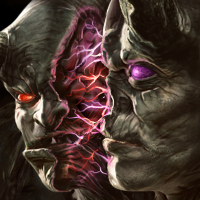 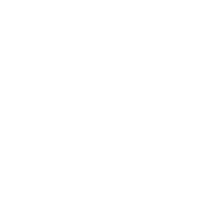 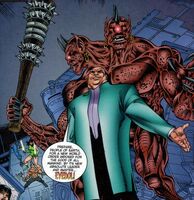