Eagle (real name tipyeléhne, also known as Black Eagle in the KI comics) is a character mentioned in Killer Instinct (1994) who made his first playable debut in the post-Season Three content of Killer Instinct (2013). He is the younger brother of Thunder/hinmatoom (or his older brother in the comics) and, just like him, is a traditional Native American warrior originating from the Nez Percé tribe in Idaho. Eagle had been kidnapped by Ultratech and used as the basis for their cyborg soldier Fulgore (the Fulgore Mk. III in the rebooted universe), until he was rescued from his confinement by the alien Glacius.

Eagle's teaser trailer, revealing him as the last new character to be added during Season Three, was first shown at the Combo Breaker tournament 2017. He was released on June 27, 2017.

Eagle is one of the few characters mentioned in the original Killer Instinct (1994) who had yet to make in-game appearances in any of the series' titles, his likeness only ever seen in the KI comics published in the mid '90s. In some of the comics, he is shown to have long and black hair, but in others, he is bald. He wears a leather headband (adorned with feathers in appearances where he's portrayed as bald) as well as a pair of leather armbands. He is shown to be holding a bow in one piece of artwork.

Eagle's 2017 teaser trailer marked the character's first official appearance in a Killer Instinct game. It portrays him as a fast-paced Nez Percé archer who wields a futuristic-looking bow and carries a whip-like weapon, is accompanied by a robotic bird of prey which appears to be his guardian and who is wearing some kind of bionics suit. Eagle also features bright, glowing glyphs across his torso, face and right arm that are reminiscent of the ones seen on Glacius, the extraterrestrial entity who has released him from Ultratech's captivity.

It is unclear at present whether Eagle's unusual equipment and bionic modifications are due to experimentations performed by Ultratech, or if they represent highly advanced alien technologies which Glacius has entrusted to his new Earthling protégé.

Eagle's Retro Costume wears similar to his brother's Nez Percé costume including his long pompadour hairstyle with braids (now with feathers at the end) but instead he wears blue pants with red pattern below along with tribal patterns at each side, a pair of brown shoes and a green loin cloth with white patterns. He has red war paint on his right arm, chest and face. His bow and arrows are authentic and hand made and his bird guardian is still organic.

A gifted amateur fighter in his own right, Eagle is skilled in both boxing and wrestling, compared to his mountain of an older brother who became a football star. Devoted in his training to become the ultimate fighter and protect the ones he loves, his skills earned him a spot with the underground spy agency, the Disavowed, who later sent him to infiltrate the first Killer Instinct tournament. His fighting prowess and intellect were unique enough to gain the full attention of Ultratech CEO ARIA, who had him captured and used as the basis for their ruthless cyborg soldier, Fulgore.

Like his brother Thunder, Eagle was a skilled warrior. He had entered a previous Killer Instinct tournament and won, using his newfound fame to publicly protest the evils of Ultratech. Unfortunately, this protest was short-lived, as Eagle mysteriously vanished shortly afterwards. Eagle was converted into the first in a line of cyborg soldiers known as the Fulgores, and was sent to participate in the upcoming Killer Instinct tournament. Coincidentally, Thunder entered the same tournament in order to discover the fate of his brother. He did not win the tournament, but he succeeded in finding out that Eagle had seemingly "perished" at the hands of Ultratech. Thunder was initially very upset by this, and spent a long deal of time mourning during the events of Killer Instinct 2. Meanwhile, Eagle as Fulgore had been heavily damaged during his fight with Jago and he was retired. It is unknown if the new Fulgore model present in Killer Instinct 2 was Eagle or not.

On another note, in Thunder's ending in the first Killer Instinct, a ghastly image of Spinal is shown rising from Eagle's grave upon mention. It may very well be that Spinal was either originally intended to be an undead Eagle, or was there as a placeholder, or (more likely) that he had something to do with his disappearance. His true fate in the original universe remains unknown to this day.

In the alternate rebooted universe, Eagle was a member of the Disavowed who worked closely with Orchid to fight against Ultratech. Thunder witnessed his brother's capture and attacked ARIA in a fit of rage, but he was subdued and Eagle was brought back to Ultratech headquarters. There he was utilized as the "human element" in a prototype for the Fulgore Mk. III, as his brain waves were copied and used as the basis for the combat AI of the Fulgore Mk. III. The resulting product is the same Fulgore that is controlled by the player in KI 2013's Arcade Mode.

After Thunder came to terms with his brother's mysterious kidnapping and apparent death, he begrudgingly struck an accord with ARIA to serve Ultratech in exchange for recovering Eagle’s remains. However, while Thunder was going about this ordeal, Orchid revealed to him that Eagle was, in fact, not dead. Thunder then broke his deal with ARIA and began to hunt down all the Fulgores he could, in search of the one that he believed contained Eagle's spirit or remains.

In ARIA’s mind, Eagle is the most valuable being on the planet. His ability to commune with and influence all forms of life, including machines, is the key to her total destruction. Modified by both Ultratech and Glacius, Eagle soars into battle with his mid-range Tech Short Bow and Weyekin Bird companion, the two working as one to take down anyone who threatens the balance of this world.

Eagle's theme, "An Eagle's Call"[1], is composed by the KI 2013 Season Three composers, Celldweller and Atlas Plug. Like his older brother's 2013 theme, this theme combines both modern and traditional instruments, and features authentic vocals by Native American singers of the Nez Percé tribe in Idaho; the main vocals were performed by Anthony "toyáaxnin" Smith, who was previously featured in Thunder's 2013 theme.

When the combatants remain idle for a short period while using his theme on any stage, then a tranquil flute remix of the KI main theme, "The Instinct", will begin playing.

Eagle in Aganos' Story Mode, as a teaser silhouette 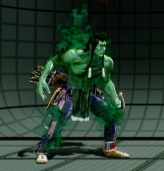 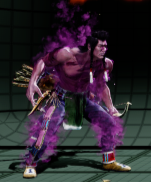 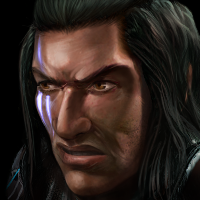 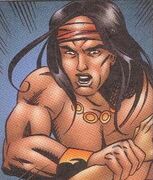 Lineart of Eagle in the 2017 comics 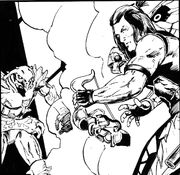