The Devil's Landing serves as Thunder's combat stage in Killer Instinct (2013). According to his story bio, this is the area that he hopes to lay his brother, Eagle's body to rest.

The stage has a natural pathway connecting two sections of land overlooking a vast forest and a river, with two dead trees on either side of the stage, with a fire going on at the far left tree and some Native American weaponry laying against the tree.

During an Ultra Combo, a fierce storm starts, with rain pelting down on the fighters, lightning striking the background and tornadoes forming over the forest.

Thunder's 2013 theme, "Hinnamatoom", is composed and mixed by Mick Gordon, featuring Jessica Andersen on flutes, and Anthony "Toyáaxnin" Smith on vocals. Also on vocals are samples of the audience "choir" from PAX Australia 2013 that Mick attended, recorded, and mixed for this track.[1][2] This theme is revered by KI fans to be an overall standout from the official Season One soundtrack, combining traditional and modern instruments in a way that brings out the best of both. The acoustic guitar part that kicks in during intense moments brings a sense of excitement that's different from the other themes.

The main flute melody heard heavily throughout the track is a remix of the main KI theme, "The Instinct".

If both fighters are idle for long enough, then a remix of Thunder's theme from the original Killer Instinct, "Oh Yeah", originally composed by Graeme Norgate, plays. 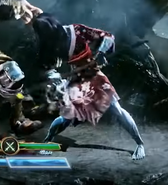 Hisako with "clean" legs after a heavy downpour on Devil's Landing