Cinder's Rooftop as seen in the SNES version of Killer Instinct

Somewhere in a desert

The Desert Rooftop (also known as Cinder's Rooftop) is a stage from the original Killer Instinct. It is Cinder's combat stage.

The stage is set on the roof of some sort of industrial building located in a desert somewhere, with rising spires (either temples or far away buildings) seen in the background against a rising or setting sun with vultures occasionally seen flying about. Lava pools appear to surround the temple, with the fighters able to uppercut their opponent into them.

The victor knocks the loser off of the rooftop, sending them splashing into the lava pool, incinerating/melting them offscreen.

The SNES version instead sends the loser fatally crashing down onto the building's surface offscreen.

Ken Lobb's cameo in this stage 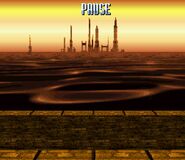 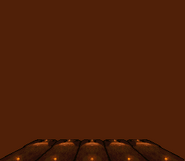 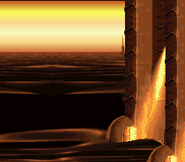