Combo Breakers are a special move in which a character interrupts a combo being performed on them by their opponent.

In the first Killer Instinct, Combo Breakers are unique to each character. When caught in a combo, performing a specific special move will break out of the combo, dealing damage and knocking down the attacker. Combo Breakers can potentially interrupt any part of a combo, save for an opener or the final hits of an Ultra Combo.

There is a rock-paper-scissors dynamic to Combo Breakers in this game: Quick breaks Medium, Medium breaks Fierce, and Fierce breaks Quick. The defender must input the corresponding button strength in order to break the combo. If it is the incorrect strength or timing, nothing happens.

A successful Combo Breaker grants a power-up spark to the end of the user's life bar, giving them access to their Post-Combo Breaker moves.

Combo Breakers are largely reworked in Killer Instinct 2. Now, auto-doubles and manuals are the only parts of a combo that can be Combo Broken. Rather than adding a spark to the life bar, they add some meter to the Super Meter. Success is not determined by button strength, but rather by whether the input is a Punch or a Kick - it must be the opposite kind of attack to work.

An Ultra Breaker was also introduced in Killer instinct 2. In order to break an Ultra Combo, the player must have at least one pip on the Super Meter, and it can only be performed during the first four hits of the Ultra. The Ultra Breaker deals around 40% damage to the attacker, giving the defender a last chance to turn the match around.

The rebooted Killer Instinct again reworks Combo Breakers. They are now executed by inputting a Punch and Kick of the same button strength, corresponding with the strength of the attacker's hit (ex. use (LP+LK) to break a Light auto-double). They can be performed again at any point in the combo, save for an opener or Ultra Combo, and can only be performed on enders if the combo is too short. Unlike previous entries, Combo Breakers deal no damage to the attacker nor knock them down, rather inducing flipout (as of Season 3) and restoring 50% of any potential damage on the user's life bar.

Shadow Move linkers can also be Combo Broken by inputting the Punch and Kick in timing with any of the Shadow Move's multiple hits. This will be indicated by a yellow flash and the announcer counting to three - if all three hits are timed perfectly, the combo will be successfully broken.

However, there is also larger risk due to the Lock Out penalty, making the attempt of a Combo Breaker more of a gamble. If the player fails their Combo Breaker input, they will be locked out from trying again for 3 seconds and their attacker will be able to continue the combo unchallenged.

In Season 2, aerial Combo Breakers were introduced, giving more depth to aerial combat. They are performed just like the ground versions.

A Counter Breaker is another new move. It is "breaking the breaker," where the attacker powers through a Combo Breaker to continue their combo uninterrupted. The player can bait a Combo Breaker in the middle of the combo with a feint, signified by a low tone. If the Combo Breaker lands while the attacker feints, they'll instantly Lock Out the defender for 4 seconds (in comparison to the usual 3 seconds) and refresh the Knockdown Value meter for an even longer combo. If the bait isn't taken for the Breaker, the combo ends and the attacker is left open for the punish. 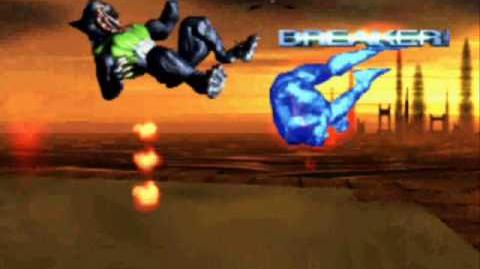