Cinder (born as Ben Ferris) is a playable character featured in Killer Instinct (1994) and Killer Instinct (2013). A human male whose body consists of super-heated plasma and living flames, Ben Ferris is a career criminal who had his civil rights revoked and was experimented on by Ultratech, accidentally resulting in his fiery state of being. In KI 2013, he's an ex-special forces operative who volunteered to have his DNA spliced with alien genetics as part of Ultratech's Project Cinder, becoming the lieutenant and enforcer of the megacorporation's CEO, ARIA. Cinder's a dashing-rushdown character in the original 1994 game, and an aerial-dashing-trapping character in KI (2013).

In the original Killer Instinct, Cinder's design was very simple. Cinder's body, due to an experimental accident, is permanently on fire. His skin has been transformed into an orange matter that resembles plasma, like the corona or surface of the sun. The skin may be able to fluctuate its own temperature, but if it is pure plasma, then Cinder would instantly melt through whatever he was touching. Because of the high temperatures, Cinder lacks hair on his body. He has a fairly muscular build and stands at a slightly above-average height, and he has a prominent jawline. His ears are gone, and he has no nose or mouth, but is still able to speak and make sounds. His feet come to a boot-like tip. His eyes are solid red orbs with no pupils or irises.

In Killer Instinct (2013), he undergoes several large changes. His body's plasma has become a much darker shade of orange and emits ribbons of fire that swirl around him like solar flares on the surface of the sun. His head, shoulders, back, knees, hands, hips, and feet resemble solid, brownish-grey volcanic rock, while the rest of his body is plasma. Thin, red wires are present on his forearms and ankles, and on his hips are small, turbine-like structures. Over parts of his body are holographic, red hexagons that resemble the same patterns found on Riptor's body and his back sports a thruster. He now has two thumbs and three fingers on each hand, and his hands are curved into alienoid claws. His eyes glow white instead of red and are fixated in a vicious scowl. He has a small-but-noticeable indent in his mask where his mouth should be. In his intro and victory scenes and when in Instinct Mode, his mask disintegrates to reveal his bare head of plasma and a near-shapeless mass of a mouth.

In concept art for Killer Instinct (2013), Cinder's stone skin was a burned black color. The stone reached further up his arms and he had a large triangular shape around his groin area. He also had two sets of eyes (four total) and a gaping mouth with a raging fire within. He was also much thinner and less muscular, giving him a more alienoid appearance. In even earlier designs he could be seen with a mechanical face plate and large metal pieces of armor, making him appear more industrial and cyborg.

Cinder is cocky, smart, egocentric, and loud-mouthed, and always acts in a dramatic and cheesy way. He seems to have had no qualms with his body being consumed by flames, only caring about the impressive powers he gained in the process. He is a feisty spirit who never backs down from a brawl and enjoys taunting his opponents in the middle of battle. He is likely the least serious member of Ultratech, and treats his job as ARIA’s lieutenant more like a fun distraction than as a position of power. He also has a habit of making nicknames for others, much to their chagrin.

As the final product of Project Cinder, Cinder's entire body has been converted into an unstable plasma energy form only controlled by the armor equipped to him by Ultratech. He can control the plasma, giving him something akin to pyrokinesis which he mainly uses to create explosive Pyrobombs. He can also fly through the air in a streak of fire. He fights in a military CQC style reminiscent of his days as a member of the special forces.

Cinder was a convicted criminal who agreed to participate in Ultratech’s chemical weapons test in exchange for early parole. A failed experiment turned him into a being of living flame. He has now been offered freedom if he can defeat Glacius in the Killer Instinct tournament.

Ben Ferris, a small-time criminal with counts of assault, breaking and entering and arson on his record, is the latest convict to be bought out of jail for Ultratech’s twisted uses. His fate is to be used as a human guinea-pig in the company’s chemical weapon developments, an unexpected side-effect leaving him consumed by fire but somehow, much to his own horror, still alive. He is kept confined in a top-security block until Ultratech decide to enter him into the tournament under the codename Cinder to defeat Glacius fairly and in full public view, his freedom providing the ultimate incentive.

Leaving as the champion of the tournament, a hostile police reception awaits him outside the gates of Ultratech. As no stranger to confinement from his former life of crime, Cinder has no intention of being imprisoned again. Using his newly acquired power, he easily evades the capture attempt, leaving his potential captors in his wake. Picking a location suitable for his current condition, he ponders his next move.

Cinder returns as the eighth character of Killer Instinct Season 2. Since the series has been rebooted, his death at the hands of Glacius in the original Killer Instinct was retconned and his backstory has been altered.

After a decorated and successful military career, Ben left the Army at age 31 to enter the lucrative world of paramilitary contracting. After all, a guy with his flawless mission completion record and skillset should be making a lot more money. Ben found himself in-demand, with each successful mission leading him to the next difficult but impressive payday. Instead of engaging in off-the-books operations for his country, Ben was doing it for crooked corporations and CEOs. This eventually landed him on Interpol’s most wanted list, but thanks to what he’d learned working closely with them in the past, avoiding them was almost too simple. Ben had his ideal job, incredible pay, and was sought after by the most powerful people on the planet.

Then he got the call that would change his life forever.

Ben received a contract offer for an almost ridiculous sum. The mission; infiltrate Ultratech to steal data related to “Project Cinder”. None of Ben’s contacts or colleagues had ever heard of anyone ever putting out a contract that targeted Ultratech. In fact, information on Ultratech was so scarce that it seemed like every other agency and corporation on the planet was pretending it didn’t exist. The danger, the difficulty, and the mystery only made the contract more appealing to Ben.

Ben signed and began researching “Project Cinder”. The more he learned, the less he felt like he knew. Ben had to go deeper. Many months passed as Ben worked Ultratech from the inside; making friends with higher level employees, bugging their gear or offices, and watching and listening for something, anything, that might point him in the right direction. The only piece of information he had after nearly a year on contract only increased his desire to complete the mission - all signs pointed toward extraterrestrial origins for "Project Cinder".

Some Kung Fu girl with a dragon has been making quite a name for herself lately. Cinder has been ordered to capture her so that Ultratech can study her and her mysterious guardian.

Fury's Core is set in an underground area on a mound of volcanic rock surrounded by lava. Around the lava is various forms of high-tech Ultratech security and equipment, including a large tower-like piston structure and several broken rooms. A hovering platform with a claw on it can sometimes be seen taking loads of cargo and flying off. Strange capsules along the left side of the stage contain mysterious humanoid figures floating in the fetal position.

During an Ultra Combo, the piston tower jams into the lake of lava which causes it to cool off instantly and the lava solidifying into molten rock and begins shooting thick steam upward.

The musical theme of Fury's Core is a remix of Cinder's classic 1994 theme, "Trailblazer". During the slow music due to characters not moving, the samples from the Main Theme will play.

Unique Trait - Fired Up!: Cinder has a "Fired Up" state, which augments the next special attack he uses with additional properties, and is used up automatically upon performing a special move. Cinder automatically gains a "Fired Up" state approximately 8 seconds (4 timer units) after it is consumed, no matter what is happening. When the Fired Up is ready for use, Cinder’s body glows brighter and hotter, and his head/shoulder flames burn more intensely.

Combo Trait - Burnout Enders: Some of Cinder's enders, called "Burnout Enders", set the opponent’s upper (punch) or lower (kick) body on fire, generating potential damage on the afflicted character for a limited amount of time, based on the ender level. Depending on which part of them is aflame, using the corresponding attack will fan their flames and increase the duration of the Burnout (ex. punching while their upper body is burning, kicking while their lower body is burning).

Instinct Mode - Pyromania: Cinder is permanently in the Fired Up state for the duration of Instinct Mode. 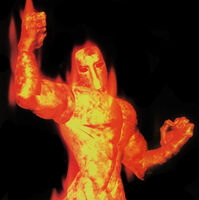 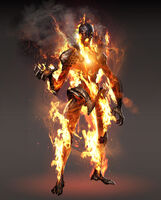 Cinder concept art. This early design was used as his teaser silhouette 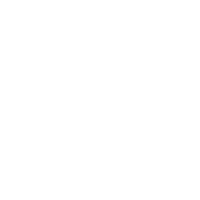 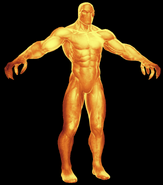 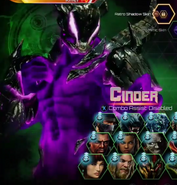 As part of the "Gold Pack" with Fulgore and Riptor 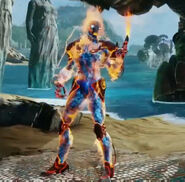 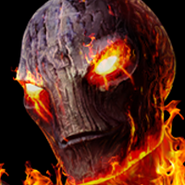 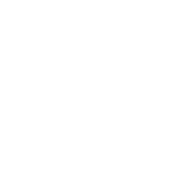 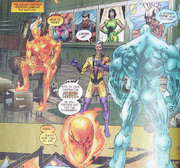