The Chinatown Brawl is Kim Wu's background stage for Killer Instinct (2013). It is the eighteenth stage introduced to the game and the first new stage that was introduced for Season Three.

The Chinatown Brawl is located in an alleyway of Chinatown, San Francisco. Various market stalls bearing Chinese signs can be seen, two motorcycles are parked in each side of the area, and garbage bags are placed on the left side of the screen. People and cars pass through the main street further in the background, unaware of the violence taking place within the alley. During an Ultra Combo, a semi-truck will suddenly crash into the alleyway and careen into the market; the Chinese signs fall from the walls, the fruit in the market stalls becomes scrambled across the alleyway and electrical wires snap due to the impact of the crash.

Kim Wu's new theme for KI 2013, titled "The Dragon Spirit", was composed by the duo Celldweller & Atlas Plug. The track features instrumentalist Rami Seo playing the gayageum, and Korean vocalist Hoona Kim singing parts of the folklore song Arirang in the style of a nursery rhyme.

The theme itself is a techno-rock remix of Kim's classic stage music from Killer Instinct 2, called "Dojo". When both characters hold still for a certain amount of time in Chinatown Brawl, the music will switch to a remixed version of the main KI theme, "The Instinct".

Translations of the various Chinese-language signs visible in Chinatown Brawl 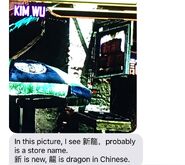 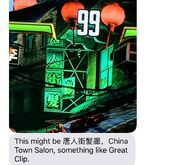