The Altar as seen in SNES version of Killer Instinct

The Altar (also called the Palace Interior) is a stage from the original Killer Instinct. It serves as Riptor's main stage.

This combat stage is a bloody chamber with pillars adorned with either lit candles or spikes and varying sizes of puddles of blood littering the floor. The namesake altar can seen in the background. 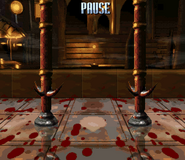 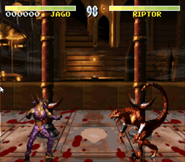